Why is PUBG recoil so bad? How to master your skills and improve accuracy and start shooting better?

The difficulty of shooting in PUBG is due to the presence of ballistics in the game. It's primitive, but in order to understand how to shoot and kill, you need to consider factors such as:

Basic principles of shooting in PUBG

Previously, mastering shooting skills was complicated by the fact that PUBG did not have a training mode, or a shooting range, or custom matches where you could practice in more relaxed environment, on bots or other targets. Instead we had to learn the basics of firing in real combat. The price of education was too high. You die — you start from the beginning.

But recently it has changed — training mode is a small map with targets, a great place to practice recoil control on any type of weapon. Also there are lots of custom matches, where players spawn again after death. This mode is more dynamic, so players can improve accuracy much faster.

Many players advise to set the graphics settings to the minimum, even if you have a top-end computer. If you look at professional players, most of them play on the lowest possible options. There are explanations for this:

I advise you to experiment with graphics and draw your own conclusions.

Adjust the sensitivity so that the base of your hand does not come off the table when you turn the camera. All movements should come from the fingers and hand, while the hand itself in the joint must be fixed. This is advice from pro shooter players.

Then increase the vertical sensitivity. This will simplify the control of recoil, it will be necessary to move the mouse down a much shorter distance, which will have a positive effect on shooting.

I won’t tell you the exact value, because the sensitivity in the game and the mouse itself also plays a role here. Just play around with different values and settle for something more comfortable for you.

Before jumping into a real fight, there are a few things you need to do:

But the basic concept of good shooting in PUBG is to control the vertical recoil. In a nutshell, when shooting (especially with automatic weapons and rapid fire), you need to move the mouse down much more dynamically than we are used to do in other shooters.

And the most important thing is practice. Professional players, such as the Korean esports team, train for 8-10 hours a day playing PUBG alone. They have a coach, a tight schedule, tasks for each player, analysis of mistakes and so on, everything is like in a real Olympic team.

Therefore, do not be surprised if for 2-3 hours a week, your skill has not grown. You must either have talent and lightning-fast reactions, or train to get results. Approximately 300-500 hours of play will be enough just to begin to understand all aspects, and you can become a real killer closer to 1000 hours of play, and even then if you do everything right.

In the meantime, you can train your accuracy and reaction on independent simulators. There are several dozen of them. One of the simplest and most popular is AimBooster. Dedicate 5-10 minutes to it and it will have a positive effect in any shooters.

Training was expected almost from the very first day of the existence of PUBG. A training ground for honing basic shooting skills, but you can also test the physics and practice landing with a parachute at specified points.

To enter the training mode, just press the button, just above the match settings. Players enter a small island with scattered weapons, ammunition, equipment and vehicles and a shooting range with targets. The targets flip over when hit, so you can hone your long-range shooting. Only available in solo mode.

Read more in our guide - training mode in PUBG.

Custom game mode - a battle between teams (or solo) in a limited safe area. The main feature is that players respawn after death and drop back into battle with weapons.

There are several equipment options. For example, only with assault rifles or only with sniper weapons. Fast, dynamic combat is ideal to improve your skills.

Just filter War mode games to be FPP, not password protected and choose region near to your location to minimize ping.

After shooting in training and War mode, it's time to jump into the heat. To learn how to shoot in PUBG you only need one thing - practice! Forget about caution, if you want to shoot accurately, hit and kill enemies in batches - land in the most popular locations (hot spots).

Birds, in order to teach the chicks to fly, throw them out of the nest.

If you want to learn how to shoot — shoot! No need to crawl and sneak through the bushes. Long looting is not for us. We find something that can shoot and go ahead - punish those little villains!

No need to worry about the fact that you are often killed and the match ends within the first 3-5 minutes. It doesn't matter. Another thing is important here - every time your shooting skill will improve. From each of your failures, you will learn valuable lessons. Each time it will be more and more difficult to kill you, and you will become smarter and more experienced.

How to control spread and recoil in PUBG?

When shooting, the sight throws in two directions - horizontal (left, right) and vertical (mostly up). Horizontal recoil is almost impossible to control, but there are a few tricks with vertical recoil.

Each automatic weapon in the game has its own spray — a pattern of hits from bullets on the wall. Let's say the AKM has one of the largest sprays (due to strong recoil), which means low accuracy, which is compensated by high power and damage. On the other hand, M's or SCAR-L have much higher accuracy, especially with attachments, and a small spray (compared to the mentioned above AK).

First of all, you need to learn how to compensate for recoil — during the burst, move the mouse down as opposed to recoil.

Here again, the training mode will help: we hold down on some machine gun and smoothly move the mouse down, while trying to keep the sight at one point, maintaining the accuracy of fire as much as possible.

The longer you push fire button, the lower you have to move the mouse. If this is not done, then the scope will rise up and all your shots will fly over the enemy.

The strongest influence are caused by (in brackets — how much it reduces the vertical spread):

With only two attachments we reduce recoil and increase stability by at least 15%, and if you choose top ones, then by all 30%!

You should have these in every match for maximum results. If there are appropriate slots for the weapon, place shoulder supports as well.

Contrary to speculation, the silencer does not reduce spread! On the contrary, it increases it by about 5%.

Sights: for automatic weapons, it is always necessary to put a collimator (dot), a holograph or an additional sight (placed on the side). Do not use sights larger than x3 for burst fire — it will be extremely difficult to control such a setup.

Let's stop  and take a break from the text)))

Watch videos where the authors show and talk about the intricacies of shooting and recoil in practice.

Another great video about every scope:

Where to jump to gain experience?

You need to land in the busiest areas, where the accumulation of players rolls over, where you normally would not land. In other words - zones with good loot, hotdrops.

Important! It is necessary to take into account the flight path of the aircraft. The locations below are examples only and do not guarantee that they will have a large concentration of players at all times.

We give preference to the small maps of Sanhok and Vikendi - the battles here are dynamic, there is a lot of loot. Find M416 in the first house is a common thing.

On Sanhok we just jump to big camps, whith a lot of houses and other constructions: 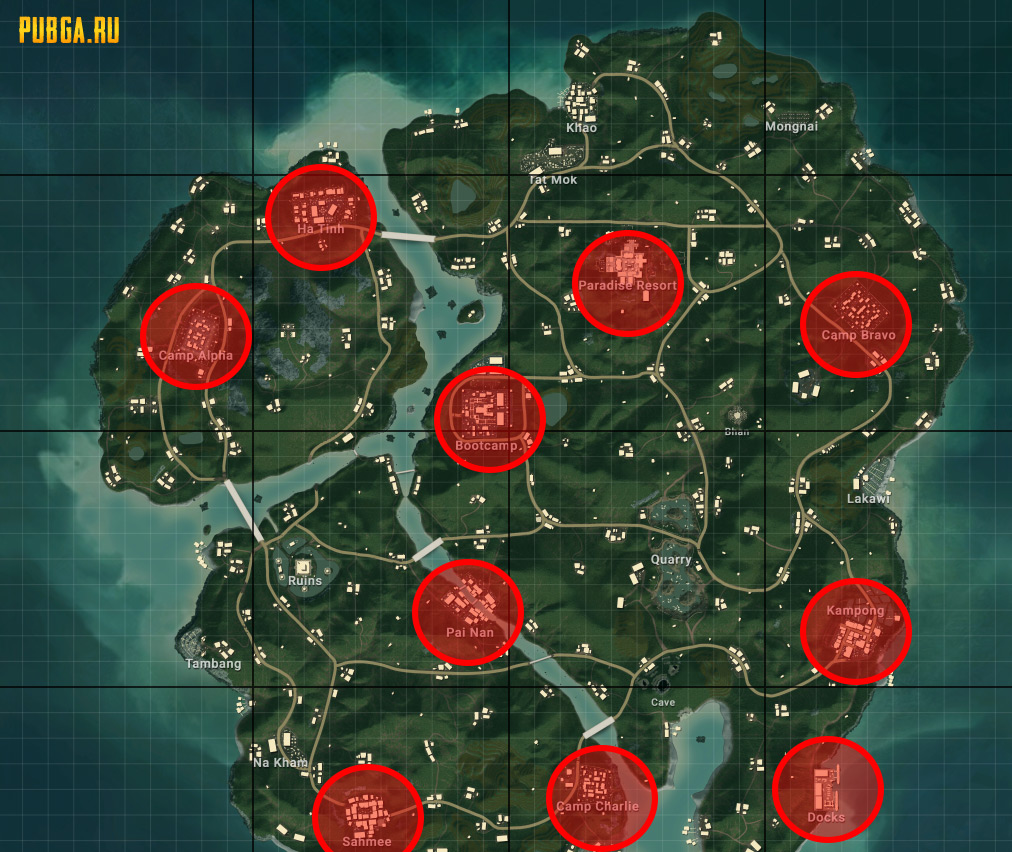 There are good places on Vikendi: Goroka, Podvosto, Villa, a castle in the center, Tovar, a dinopark, a factory and a spaceport. 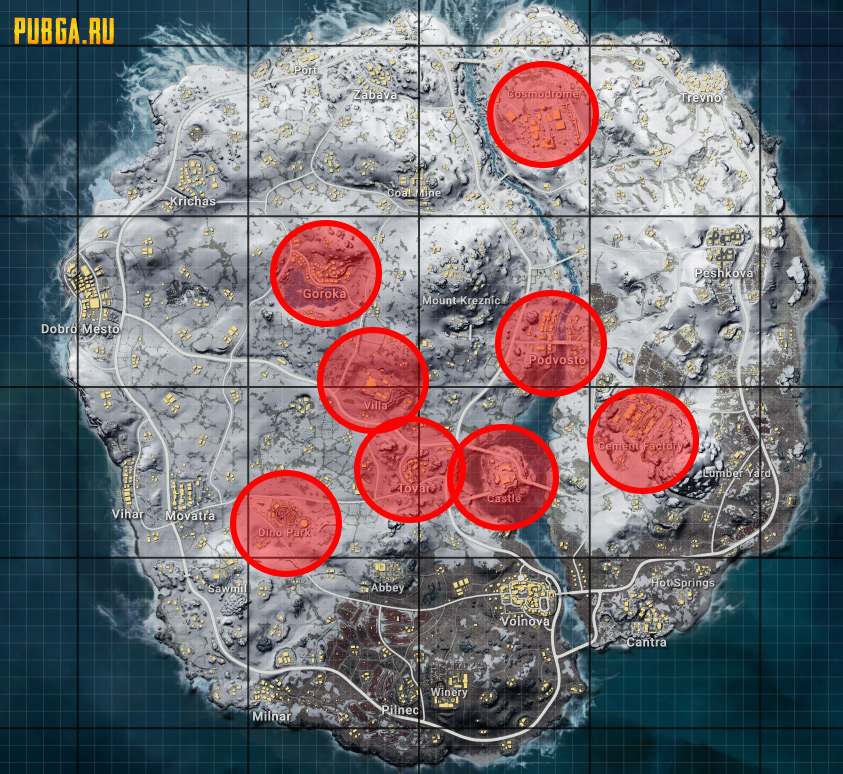 For the forest map of Erangel, the following places can be distinguished (marked on the map): 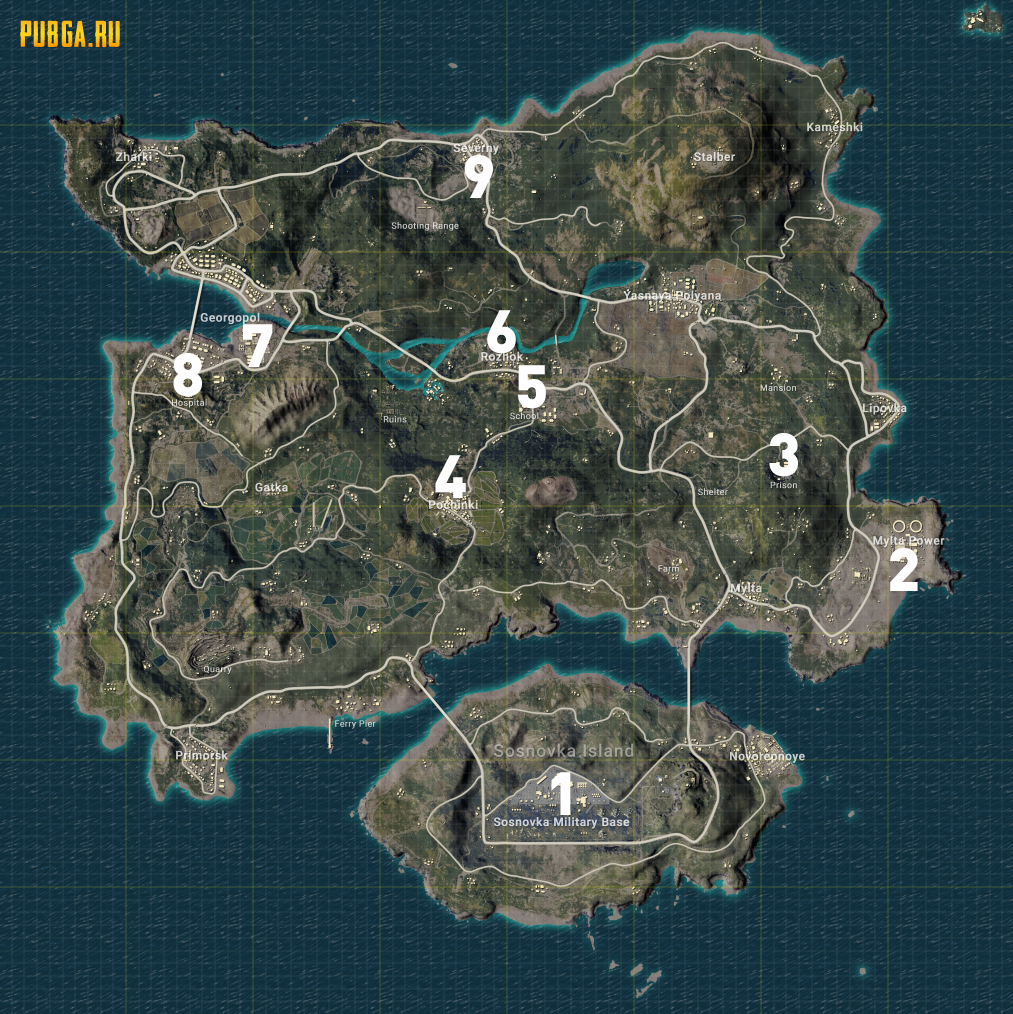 The desert map of Miramar is more open, here, except for houses, stones and hills, in general, there is nowhere to hide, so for a hard chop and honing your shooting skills, you do not need to choose settlements with a large abundance of houses in which everyone usually hides. In this regard, the choice of places is not so great: 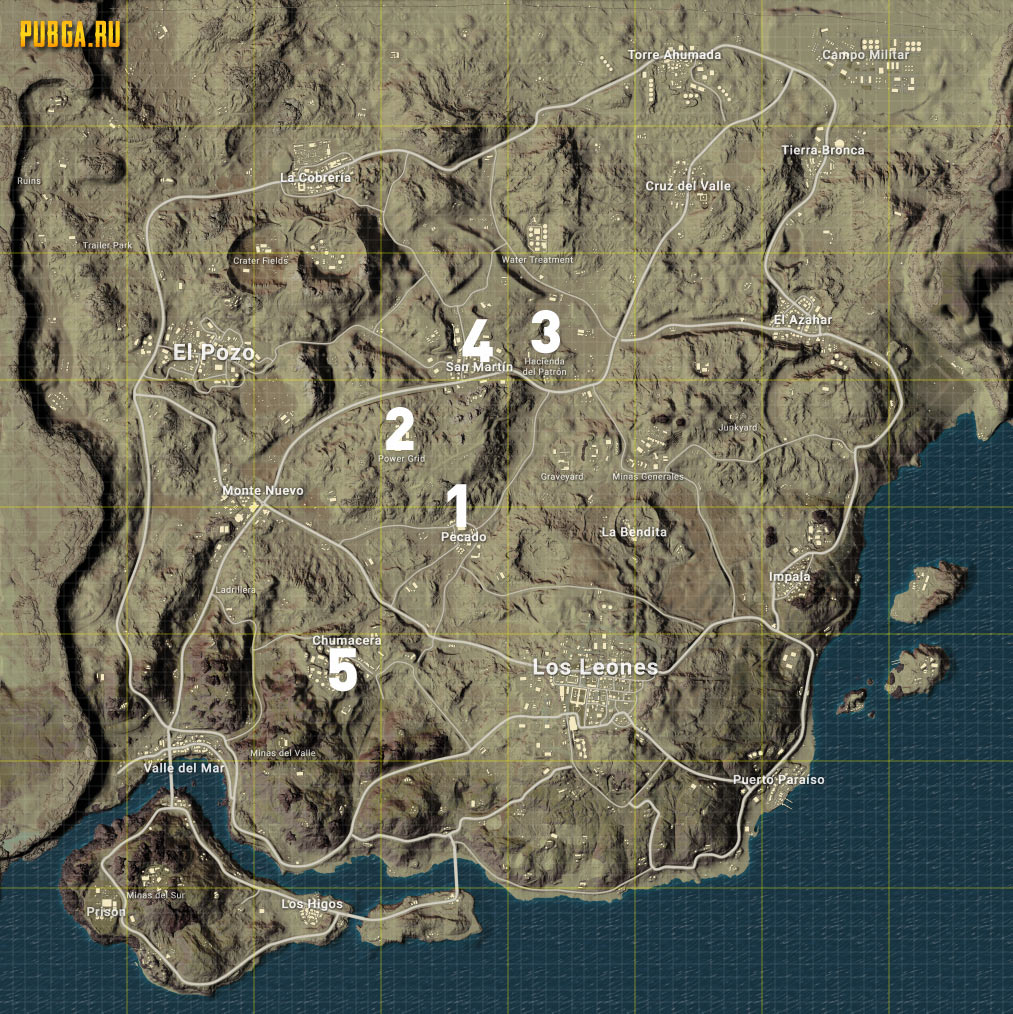 Immediately after landing, you do not need to spend a lot of time collecting loot. Pick up the first more or less convenient weapon and go forward to meet adventures. The task is to train the shooting skill, and not to take top places at the end of the match.

At first, it is better to always jump to one point, for example, the castle on Vikendi is still my favorite.

But when you gain experience - change places and situations to train your speed of thinking, flexibility and adaptability to different situations.

▲
Guides
Popular
26 games like PUBG
Why PUBG Lite was closed?
Training mode in PUBG
How is PUBG Lite different from regular PUBG in Steam?
What is TPP and FPP in PUBG?